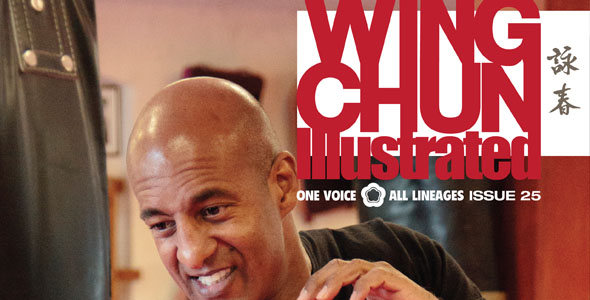 Wing Chun Illustrated is the world’s only magazine dedicated to Wing Chun regardless of lineage making it an unbiased peer credited publication and a leading voice of the Wing Chun community. The magazine features articles by and about the world’s greatest exponents of the art. With that in mind, we are pleased to announce that our head Instructor Dr Mark Phillips is being featured on the front cover of issue 25 (which is currently on sale).

While this confirms his place as one of the “greatest exponents of the art” it does support our view that we have a great teaching team and staff at the London Wing Chun Academy. To find why we are highly regarded please read his interview in Wing Chun Illustrated. He discusses his past training methods, as well his thoughts on the current Wing Chun community, the problem of the YouTube generation, and the London Wing Chun Academy’s efforts to present the combative practicality of Wing Chun on YouTube (To find out more information on Sifu, includng his history and achievements please see The Head of Our Team).

Here is a short excerpt:

“Would you tell us some interesting stories of your early days in Gung Fu?

The early days of Wing Chun in the UK were very different to today. There were not many Wing Chun schools full stop, it was still a relatively unknown martial art. In the early 1980s, there were quite a few Challenge (Beimo) Fights between rival martial arts styles and even a few Wing Chun schools. When I began studying Wing Chun in the mid-1980s, this phenomenon became less frequent, but it was still the backdrop that set the precedent for how we trained at the time.

We trained particularly for Beimo. It was an expectation that we would be challenged to a fight. Some of us faced informal challenge fights from other styles of martial arts, while some experienced an “ambush phenomenon” in which people would turn up to your class pretending to be students then attack you when you were teaching. These events lead to a culture of us training extremely hard, pushing our physical and mental barriers. ”