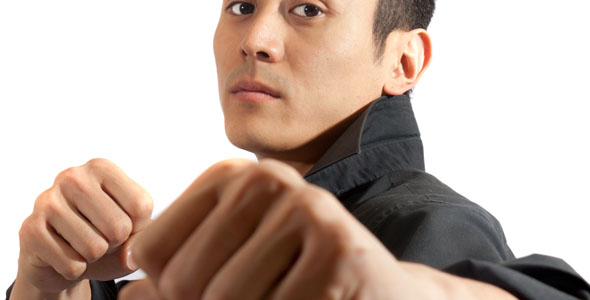 What are the advantages and disadvantages of always facing forward in comparison to being side facing?

There are advantages and disadvantages for both. If you are relatively square, the manner in which you generate power is not the same as if your hips and shoulders were slightly turned. When your hips are fully rotated as in a sideways stance, it is possible to generate a tremendous amount of power in a punch or a kick by rotating the hips 90 degrees. In contrast, if you stand relatively square with your shoulders, it is possible to move more efficiently, however there is less of an emphasis on a single knockout punch. Instead the emphasis in Wing Chun is to use multiple strikes in a quick, direct, but efficient manner in which to dominate the space between the attacker’s body.

In Wing Chun, the approach to generating power is different. In this martial art, power is drawn from the elbows with less reliance on the rotation of the body. Although, rotation is a key factor in Wing Chun, it is used in conjunction with structure and speed of movement Hence, speed and mass of momentum is essential to generate power in Wing Chun, add the rotation of the hips, then the idea of power generation is different to other styles of full contact fighting.

As we hit without gloves, the reliance is not to hit as hard as we can, but as accurately as we can. The difference is clear when hitting with a bare knuckled fist as opposed to punching through a glove. The injuries sustained from bare knuckle strikes to the nose, cheekbone, or throat of an attacker, is likely to lead to a swelling and even splitting the skin in the facial regions (especially around the cheekbone and eye socket). The objective when using Wing Chun is to inflict pain and overwhelm the attacker into submission, not necessarily to knock them unconscious with a single blow. Therefore in this context, Wing Chun exponents prefer to face their attackers in order to deliver quick successive blows in an efficient manner.

Another factor to consider is that the Wing Chun concept of efficient relies on the Centre Line Theory. While Wing Chun is not the only martial art to employ a Centre Line theory, it is critical component that guides the basic fighting strategy of this martial art for self defence.

The human body is divided into six gates, and this provides the ability to map a strategic, yet efficient plan of movement during combat. The gates are defined by the centre line that runs down the middle of the body, then a horizontal line that goes the shoulder/chest line, and then you have ‘the mother line’ that runs along the waist line thus giving six gates. These are six regions in which the arms and legs can move from.

The objective of Wing Chun is to have all six gates facing the attacker, but only to face three of the attacker’s gates. Hence, if you stand sideways you will only present half of your gates in a direct manner. Overall, the answer of why Wing Chun fighters face forward is more complex. It has less to do with the delivery of a powerful punches or kick, but related more to the strategy of moving efficiently, directly, whilst controlling the attacker’s space and/or movement. Hence, the objective of Wing Chun is to intelligently balance the strengths and weakness for better self defence prowess.