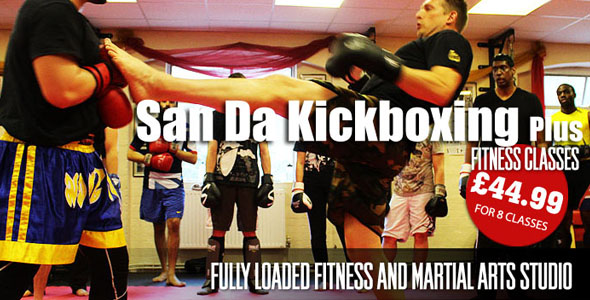 San Shou (also known as San Da) Kickboxing could be considered the modern application of traditional Chinese martial arts. San Shou (San Da) Kickboxing is not a martial art in itself, rather a format of fighting that combines striking with punches, kicks, elbows and knees for professional fighters, with wrestling, takedowns, throws, and leg catches. This style of fighting truly encapsulates all ranges of stand up combat, which transfers nicely to self defence application. Yet, San Shou Kickboxing is derived from the tradition of challenge fights between differing Chinese Martial Arts, where each of match was fought on raised platforms above the ground.

Although, not as well known in the Western world as Muay Thai boxing, San Shou Kickboxing is equally as effective, but focuses more on clinching and wrestling from leg catches. In fact, it could be said that San Shou (San Da) Kickboxing focuses more on the missing link between striking, wrestling, and takedowns. This form of training truly allows traditional martial arts students the ability to test themselves in a modern method of free fighting.

So, the question remains why do we think Wing Chun students should practice San Shou Kickboxing? Well the simple truth is that there are some limitations to the way the ordinary Wing Chun student trains. Often simple, but natural attributes of fighting (e.g. timing, distance control/judgement) are sometimes overlooked in favour of practicing Chi Sao. Yet, Chi Sao in its simple form is just a method of controlling (or spoiling) an attackers arms in order to react and strike cleanly. Hence, the format of San Shou (San Da) kickboxing allows a Wing Chun student to take Chi Sao one step further in order to clinch, off balance, and throw an aggressive opponent.

More importantly, this format of free fighting allows our Wing Chun students to more effectively practice closing the range on kicks, which is a traditional strategy of fighting in Wing Chun, as well as understanding the basics of boxing, kicking, and wrestling. Fortunately, this format of fighting lends itself to practical, rather than theoretical fighting, which is comparable to Muay Thai, Boxing, Kickboxing, and Mixed Martial Arts. Therefore, our training methods are comparable to any combat sport, making our approach to coaching unique within the Wing Chun community. Basically, what we do is unique to us, and will not be found anywhere else.

Overall, we believe that traditional Martial Arts such as Wing Chun still have a place in the modern world of combat and self defence. So much so, that we think that our San Da Kickboxing program is a great link between the Wing Chun and the Brazilian Jiu Jitsu program that is also offered at our gym. Although our San Shou Kickboxing is a standalone programme in our gym, it does offer those Wing Chun students that take part something extra in which to test their skills. Why not? After all, Wing Chun is a traditional Chinese Martial Art that should be expressed in a framework of a modern form of combat.

Our San Da Kickboxing class meets every Wednesday at 8.45 and Friday at 8pm. New Students are welcome anytime.