The Self Defence Stance of Wing Chun 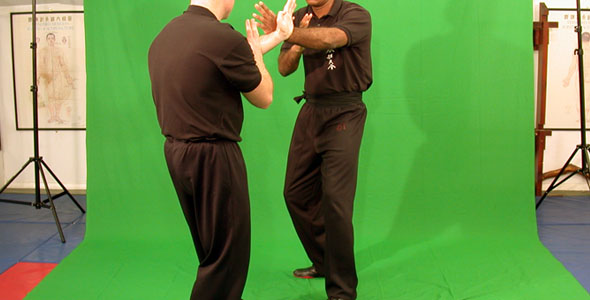 The fighting or self defence stance in Wing Chun is simply a variation of the basic Ma practiced in the basics of this martial art. In this version the leg is placed forward to protect the groin.

The fighting or self defence stance in Wing Chun is simply a variation of the basic Ma practiced in the basics of this martial art. In this version the leg is placed forward to protect the groin and accommodate forward pressure of being attacked by a person. The legs are not balanced in a 50/50 split as in the basic (Yee) Ma. However, there remains an emphasis on the structural connection between the shoulders, hips, knees, and feet. If these joints are correctly connected, then  self defence applications of Wing Chun become easier and more effective.

There is a slight difference when viewing  the wing Chun fighting stance square on. The self defence stance in Wing Chun is different to the Kim Yeung Ma in that there is a necessary rotation of the hip to create structure in the stance. This prevents a Wing Chun practitioner from being pushed over during a self defence confrontation, and also facilitates low kicks in the form of stamps on the attacker’s knee.

Although the basic stance teaches you the concept of facing, the fighting stance shares this notion with both shoulders facing the attacker, this allows less telegraphic movement when throwing a punch.

Wing Chun is just like any other martial art when applied in a self defence situation. The leg is placed forward and our shoulders are slightly off centre, but the emphasis for Wing Chun is still the concept of facing. In this situation, there remains a triangulation between the arms and the body at a slight angle. This allows the ability to punch efficiently without giving any early indication of rotation from the shoulders. For example, if you can imagine when ordinary people punch, they punch at eye line, so you can see their shoulders moving. In Wing Chun, we try to keep our shoulders relatively fixed in order to generate power from the elbows (in addition to the hips), this leads to a reliance of staying relatively square.

There are a number of tests to see if you are forming the fighting stance correctly. Firstly, are you easily pushed backwards, i.e. can you hold your ground slightly with little effort? Secondly, is can you lift your front leg while baring pressure on your Man Sao arm? Thirdly, can your stance withstand lateral force across your stance? People are more likely to swing punches or grab you in a self defence confrontation (or a fight) and this leads lateral pressure along the flank of a martial arts stance. Lastly, how easy is it to lift your front leg? If it rises too easily, then perhaps the ratio of balance is incorrect. The front leg should lift easily to bridge kicks and fall quickly with weight to root to the ground.

If any of these elements are of concern, then please see an experienced qualified Wing Chun instructor for advice and correction. It may make a difference in the majority of self defence situations in London.