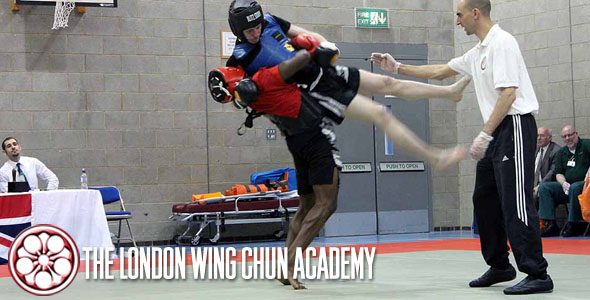 The format of the competition was simple. Three 2 minute rounds, the winner is decided by knock out, or points accumulated by clean strikes, throws, takedowns, or push outs. Under these rules, three fighter’s from the London Wing Chun Academy won one gold and two silver medals.


One gold, two Silver medals! Yet again members of the London Wing Chun Academy have performed well in a full contact competition.

On the 14th April 2014 three of our fighters entered the BCCMA full contact San Shou Tournament held in Milton Keynes, and more impressively each fighter returned home with medal. This is a fantastic performance by our fighters, and shows that with the correct coaching Wing Chun can still be effective in a competitive environment.

The format of the competition was simple. Three 2 minute rounds, the winner is decided by knock out, or points accumulated by clean strikes, throws, takedowns, or push outs. Note, if the fighter steps or is forced out of the competition area twice in one round, the opponent wins that round.

A special mention goes to Simon Kag who won a gold medal in his debut San Shou Competition. He also who also won a gold medal in his first submission only Brazilian Jiu Jitsu competition earlier this year, which is impressive considering that he does not specialise in Brazilian Ju Jitsu.  This is not only remarkable as he is new to competition, but shows that he is developing into a well rounded Martial Artist and fighter that we are proud to have in the London Wing Chun Academy.

Each fighter won the first round of their tournament, beating their opponents with a good combination of striking, throws, and push outs. However, the second round didn’t go our way, as Charence Titre who faced a very tough opponent lost by injury. In what was often a hard hitting, but bruising exchange, Charence was forced to rely on the tactic of throwing his opponent. In this sense, he would avoid the power of his opponent, but wear him down with takedowns. This plan seemed to work well. He scored some spectacular throws, but one of which his opponent landed badly on Charence’s knee which resulted in a sprained ankle. Unfortunately, he eventual lost to a combination of strikes and push outs. Damien Szudra who dominated his opponent in his previous bout, also faced a tough seasoned opponent, unfortunately he lost on points despite scoring a large number of clean takedowns.

San Shou (San Da) Kickboxing is a great competitive sport, so get involved join our team. Perhaps you’ll be our next medal winner.