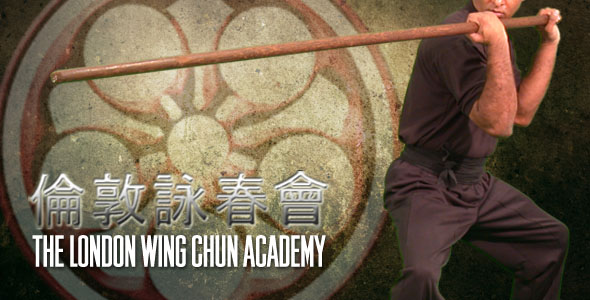 Luk Dim Boon Kwun which means six and a half point pole is one of the two weapon forms studied in the Wing Chun martial art style. Historically the form is thought to have been modelled on the Dragon style of Kung Fu. Hence, the Wing Chun pole is often referred to as the Dragon Pole. However, what is the significance of the Wing Chun Pole form in modern practice, and would learning it really make a difference to applying your Wing Chun in today’s world?

The simple answer is that both weapon forms in Wing Chun advance the practitioners empty hand skills of combat in a physical and conceptual manner. On a physical level the Dragon Pole form is important for training the Wing Chun system because the form introduces a low horse stance (Ma) typical of many other Chinese Martial Arts and Wu Su styles (see photo below). This stance requires that your feet be firmly planted or rooted to the ground, thereby encouraging you to drop your body weight. This is essential because the heaviness of the pole dictates that you must use your body as a fulcrum in order to move the pole. In effect this is the first opportunity in which a Wing Chun student is learning how to root and move a weight around their body. However, the Dragon Pole form also introduces the opposite concept know as a ‘Hanging Stance’ in which the front leg is lighter and retracted backwards (see photo below) is also introduced to the Wing Chun practitioner.

In addition, to the new variations of the stance and weight distribution this form introduces a sideways posture that is unusual for the Wing Chun practitioner because it contradicts the concept of facing introduced in the Sui Nim Tao (1st Form). These variations in stance and footwork are necessary and reasonable considering that you are now learning to fight with a heavy weapon. Hence, the sideways posture allows for better control of the heavy pole, while keeping the body a smaller target to strike. These characteristics have conceptual conations for applying Wing Chun in a fighting to self defence context.

Conceptually, the form consists of six different techniques repeated in various directions, plus a half movement. However, one should note that there are seven principles associated with practicing the Dragon Pole, and this dictates how the pole is used. The actions can be described as: (1) TAI (to uproot), (2) LAN (to expand), (3) DIM (to shock), (4) KIT (to deflect), (5) GOT (to cut down), and the half point movement is (6) WAN (to circle). Furthermore, there is an additional seventh concept of Lau (to flow) binds all these ideas together.

Overall, the Dragon Pole form introduces a new set of training practices and demand on the body, while introducing a alternative way of thinking about Wing Chun. Yet, it reinforces the concept of efficiency by forcing the practitioner to rely on less movement to damage or harm their attacker. In a sense, the objective is to harm the attacker in as less moves as possible without exposing yourself to danger of a counter attack. One could say with in conjunction with the Knife Form it completes a full understanding of the Wing Chun martial art.