In Self Defence: What type of martial art punch do you need? 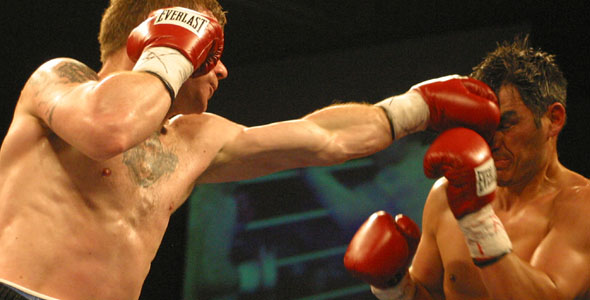 Is it necessary to understand the differences between a Boxing or Karate style punch and a Wing Chun punch? The simple answer is yes. Think of each type of martial art punch as a different tool for self defence.

Regardless of the style of martial art, straight punches offer an opportunity to strike directly at a target in self defence. Hence the Wing Chun punch is not unique. However, there is a major difference in the physical structure and the range in which both types of straight punches are effective. The Wing Chun punch primarily moves and lands with an upright fist striking with the bottom three knuckles of the hand. This differs to striking with the top two knuckles of a standard reverse punch which common to karate, Taekwondo, and even Boxing or Mixed Martial Arts. Hence, that the actual surface of the fist that you strike with is completely different.

As a general rule of thumb, straight punches in which the fist reverses (so the palm faces downwards) are effective over longer distances. Whereas, Wing Chun punches are more effective at close quarters for the simple reason of structure. Regardless of the style of martial art, to punch effectively an alignment of the major joints (i.e. fist, elbow, should, and hip, knee and ankle joints) of the body is required (we refer to this as structure in Wing Chun). When throwing a straight punch at long range in boxing or karate, power is maximised by this alignment. However, imagine throwing this punch in self defence over a distance of 12 inches. It’s very likely that the elbow would bend outwards on impact, which may lead to significant loss of force and effort.

The primary difference is in the physical structure of the straight punch rather than its application. The structure is different because of the shape of the arm when punching, since the fist and therefore the rotation of the elbow has a different position. In Wing Chun the fist is upright and the elbows are pointing downwards. This creates a triangular structure between the striking surface of the knuckles that lines up to the shoulders.  So when punching over a short distance of 12 to 18 inches the feedback from the actual point of contact is being regenerated back through the elbow, into the shoulder, hip, knee and then ankle. In other words, the physical impact of the punch is being supported by the ground (see blog on stance). With proper alignment of the joints, even a small person could punch effectively over a close range (distance).

Overall, the two types of straight punches have advantages and disadvantages. At long range the reverse punch is more effective as it can generate weight, while at close range the Wing Chun punch is more efficient with better structure. Ask yourself this question. In a self defence situation, how close is your attacker likely to stand before they attack you? Your answer will give you the right tool for engagement.