How to Avoid Being Taken to the Ground 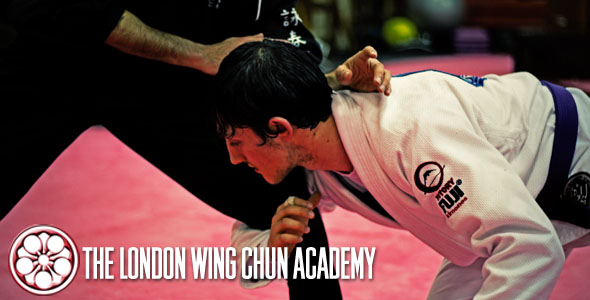 Avoiding a wrestling shoot or takedown in San Shou Kickboxing or even MMA is challenging at best especially when a takedown or wresting throw is combined with punches and kicks.  There are strategies in Wing Chun that can help prevent and even avoid being forced or throw to the ground.

This video shows 3 simple Wing Chun strategies that may help your takedown defence. These techniques are commonly taught here at the London Wing Chun Academy as we think they are flexible and can be used for San Shou Kickboxing, Brazilian Jiu Jitsu, and even Mixed Martial Arts (MMA) training. Even for those that wish to test their Wing Chun skills against other styles of martial arts, especially Mixed Martial Arts (MMA) or Wrestling.

The first Wing Chun technique requires that you control the space between you and the other fighter. This is typical of any martial arts comparison, but key here is that you control the distance between you and the other person.  In a San Shou (San Da), Brazilian Jiu Jitsu, or Mixed Martial Arts (MMA) environment you must prevent your opponent connecting to your body in order to avoid the Wrestling takedown, shoot, or throw.

Wing Chun has lots of great hand fighting techniques that are useful for takedown defence. However, the central idea that all of these techniques are based on is the concept of Wing Chun barriers or bridges. If understood and used effectively it is possible to avoid the wrestling takedown in San Da, BJJ, or MMA training. Overall, your hands are your first barrier, and your elbows being the second defence against the wrestling takedown.

In Brazilian Jiu Jitsu (BJJ) it is referred to as posture. This is a similar concept in Wing Chun training. If caught in a Wrestling clinch or takedown position even in BJJ, MMA or San Shou Kickboxing it is wise to focus on establishing a good Wing Chun posture that improves your structure. Mixed Martial Arts (MMA) training involves lots of Wrestling training designed to break posture, off balance opponents and takedown to the ground. Therefore it is necessary to constantly seek to improve your structure and balance in order that you are not thrown or forced to the ground. There are a number of basic ideas in the video that include pushing your hips forward while improving the alignment of your spine. Watch the video for the details on how to avoid being taken to or thrown on the ground.