How does a Small Person Hit Hard in Self Defence? 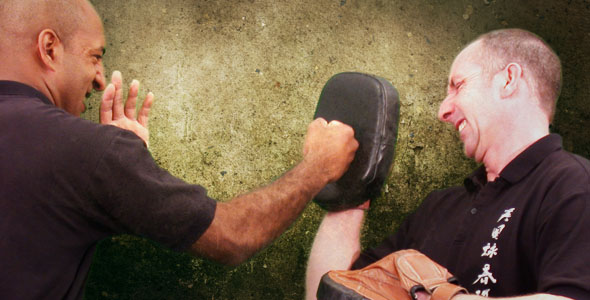 Often underutilised in self defence, the basic Turning Punch in Wing Chun combines a number of essential concepts for this martial art. Not only is this movement very effective in self a defence, but if applied correctly it is extremely powerful, even for small people.

The turning stance is referred to as “Jun Ma” in Wing Chun (literally translates as ‘Jun’ meaning turning and ‘Ma’ meaning stance). This method of punching is a perfect example of how a small person can use correct structure and body mechanics to punch above their weight. It also introduces the notion within all Chinese martial arts of Swallowing and Spitting, i.e. the idea of absorbing force and repelling back to the attacker. For example, if your attacker was applying pressure, a simple turn would displace that person’s effort, and leave them vulnerable to a counter punch.  This concept is not new to martial arts; it is also practiced in Jiu Jitsu, San Da Kickboxing, even boxing and wrestling. However, Wing Chun places a greater reliance on the physical structure of the body when turning.

So how do you turn correctly in Wing Chun? The answer is simple; you turn from your waist ensuring connectivity between your shoulders, knees and feet. This action relates back to the importance of the basic ma. Recap, the basic ma makes connection between the 6 major joints in the body i.e. wrist, elbows, shoulders, hips, knees and feet. Note, these joints are sometimes referred to as the 6 harmonies.  By connecting these joints in motion, it not only generates more power, but roots the Wing Chun practitioner to the ground. Hence, the Wing Chun saying “Power comes from the ground”. Moving in this fashion keeps connectivity with the ground while joining the upper part and lower part of the body.  Just like any martial art, power is generated from the waist. Hence when combined with a punch, the power should be equal to a good right cross thrown in boxing, kickboxing, or mixed martial arts.

Overall, the Wing Chun Jun Ma (Turning stance) is the ultimate expression of simultaneous attack and defence. On one hand, it is used to change the angle of the body in order to deflect punches, pushes, or kicks. Yet, when combined with a punch and/or a Laap Sao, the movement becomes a power weapon to counter attack in self defence.

In other words, when combined with a punch, turning becomes a combination of rotation and deflect of force while applying a simultaneous attack.. Another way of looking at this technique is that while turning and rotating the hips as much as you can, you drive your fist forward, propelling it in a straight line.  This is similar to the torque a Thai or San Shou boxer would generate to throw a round low kick! Yet the Wing Chun Turning Punch is twofold: firstly is to punch while secondly to displace power and bridge.