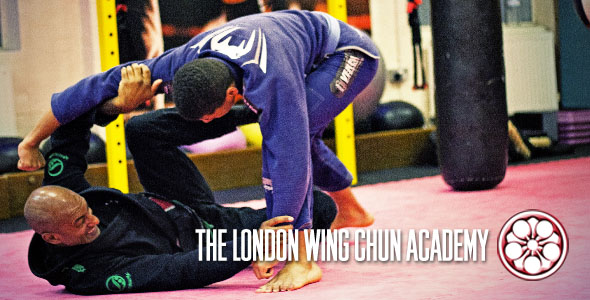 In this week’s video instalment we take a break from Wing Chun to look at some simple Brazilian Jiu Jitsu (BJJ) Self Defence concepts of how to defend against punches to your face when you’ve been unexpectedly thrown to the ground.

The term ‘Ground and pound’ is normally associated with Mixed Martial Arts (MMA), but refers to the attack in which someone throws you to the ground, mounts you, and then punches you in the face. As brutal as it sounds it is now very common to see this pattern of behaviour outside of the MMA ring on many streets in your local neighbourhood.

In fact, research statistics suggest that at some point a fight will end up on the ground. So it is vital to understand how to defend yourself when someone is standing over you throwing punches and kicks. Of course the best thing to do is to stand back up to your feet. After all it is common sense that you do not want to be lying on the ground with a standing attacker.

You Must Learn How to Stand Up Safely

Under these conditions, Key to any self defence strategy is to look for the right opportunity or moment in which to stand up. Getting to your feet at the wrong moment may lead a heavy blow to your face. The objective of this week’s video is to examine when is the right time to safely get to your feet.

This video introduces a few simple BJJ concepts on how to fight off your back in self defence. These ideas are taken from Brazilian Jiu Jitsu’s well known and tested Self Defence training program. What we discuss in this video is universal for self defence and will help anyone defend themselves on the ground. We also examine why you should not attempt to use Wing Chun techniques in ground fighting, but instead stick too simple concepts taken from BJJ which have also been tested in MMA.

You Must Make Space to Defend and Stand Up

The first part of the video introduces the idea of making space by creating barriers in self defence. We discuss using your feet as the first line of defence, as well as your knees and then hands. The idea being that someone has to get past these barriers to attack or punch you in the face. It is vital that you keep your head safe from attack. Hence these concepts are important to fight on the ground.

Part two of the video introduces the idea of the ‘Sling Shot’, where you use the retreat of your attacker to make space to stand up. Since the ultimate goal is to stand up when you’ve been thrown to the ground. Then you have to make space to do so. We use the up kick to the face of the attacker to force him to pull away, and only then do we use a technical stand up technique taken from BJJ.

The technical stand up is key to getting to your feet safely without being punched in the face. This is a key technique practiced in every one of our Brazilian Jiu Jitsu classes here at the London Wing Chun Academy. The movement requires that you protect your head and stand in a firm base while maintaining a strong posture.

Finally Be Careful Not to Out Stretch Your Arms

In the final section of our video we examine why you do not use Wing Chun hand techniques in ground fighting. Simply because these ideas were not designed or intended for ground fighting, but also they extend your arms too far away from the body. One of the first things that you learn in our Brazilian Jiu Jitsu class is not to extend your arms away from your body. Extending your arms away leaves them vulnerable for arm locks in a Bjj class. However, in the street it will leave you open to ground and pound.